If you thought rain showers were the preserve of 5 star hotels, think again.

Bring the feeling of standing under cascading rainfall into your home with the best rain shower head and get this luxury for far less than you might imagine.

We’ll dive straight in now with our rain shower head reviews then give you some handy pointers to further streamline your buying decision. 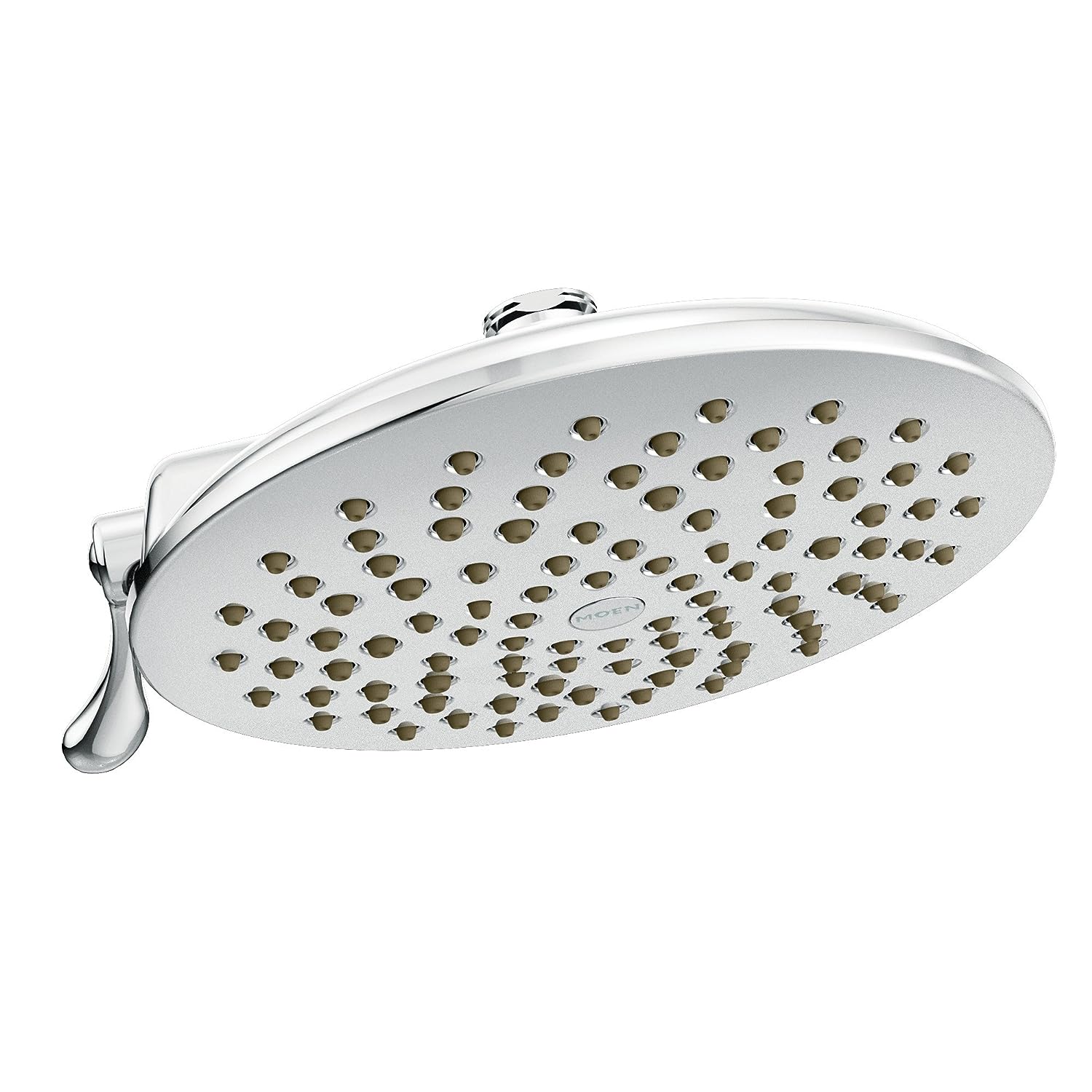 First up in our rain shower reviews is the Velocity, a consistently popular rain shower head from the industry giant Moen.

If you’ve got a contemporary and minimalist bathroom, the commanding chrome shower head makes a great fit. It’s also understated enough to slot in with more traditional décor, too.

Installation is a cinch and you should be under the relaxing water in less than 30 minutes.

Moen roll out their patented Immersion technology to ensure this 8-inch head delivers a super-powerful cascade of water to liven up your morning routine. You can toggle between 2 power modes.

With a flow rate of 2.5 GPM, this is a shower that delivers fully on the performance front but is designed with water conservation in mind. If you’re uprating from an older shower, you can expect to notice some savings in water consumption.

Unless you live in area with very low water pressure, this 100-nozzle rain shower is an absolute must. 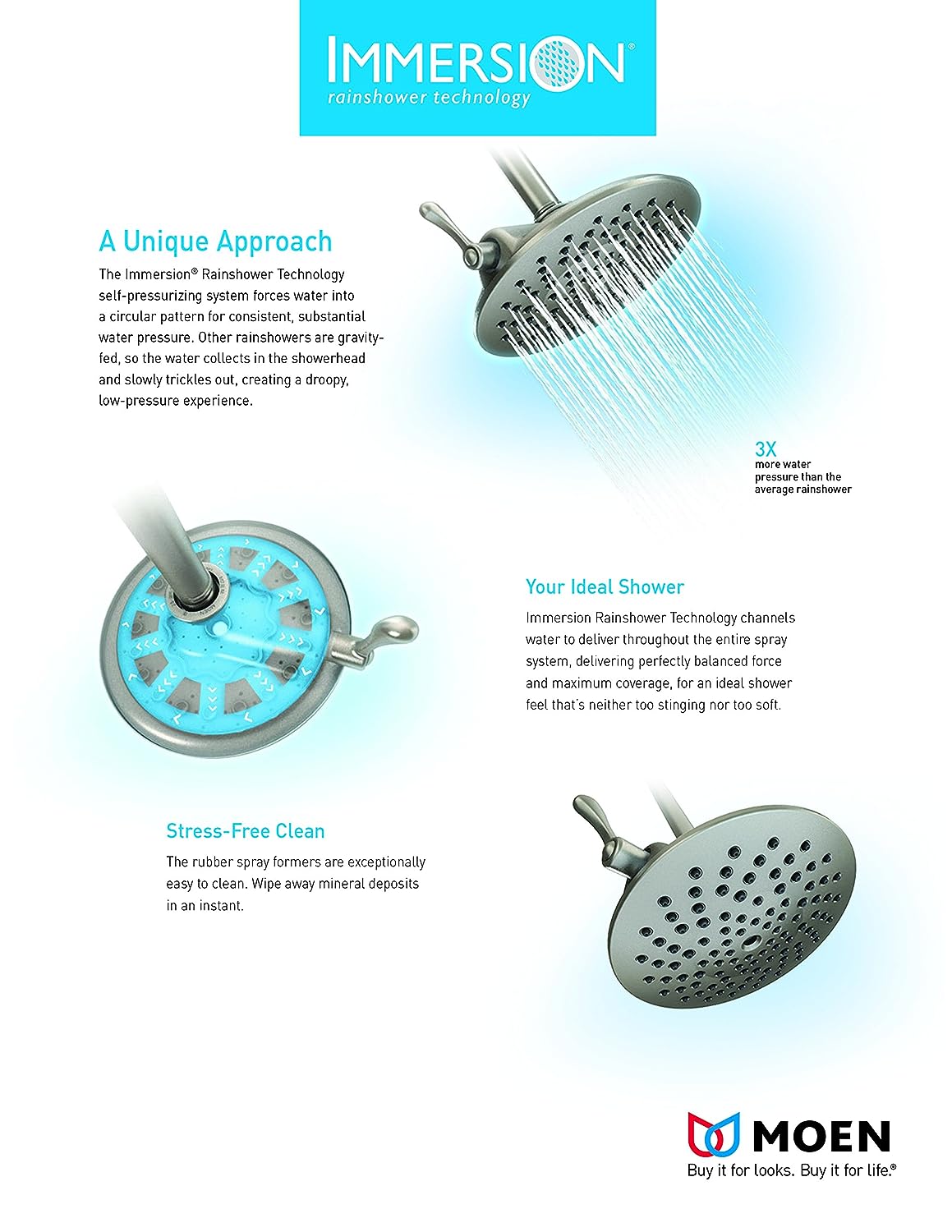 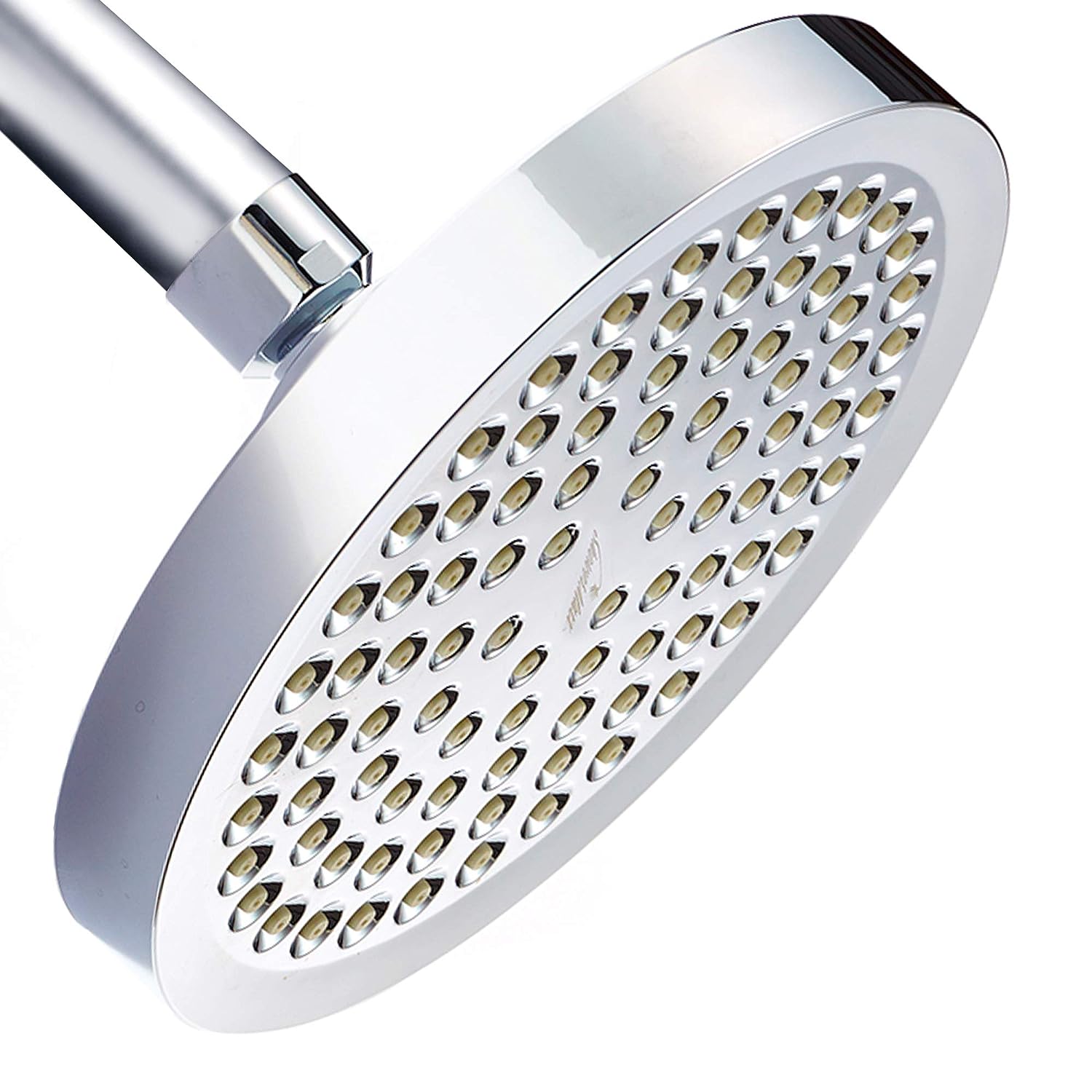 Next up in our rain shower reviews is a hard-hitting 6-incher from ShowerMaxx. As with any budget product, you need to keep your expectations reasonable. While you will encounter the occasional complaint about longevity, we think the chromed ABS finish is more than fit for purpose.

Installation couldn’t be more straightforward even if you’re not practically-inclined. You’ll be under that volley of water in a matter of minutes.

As with most rain showers in this class, you’ll get a flow rate of 2.5 GPM which is powerful enough to give you a robust shower without plundering too much precious water.

90 high-pressure jets combine to really pummel your body with water and you can angle things to get the shower of your dreams every time.

The crowning beauty of this cheap but highly capable rain shower head is the lifetime warranty you’ll get safeguarding you from any concerns about durability. If you’re looking to get a flexible and thorough rain shower without spending a fortune, ShowerMaxx delivers in fine style. 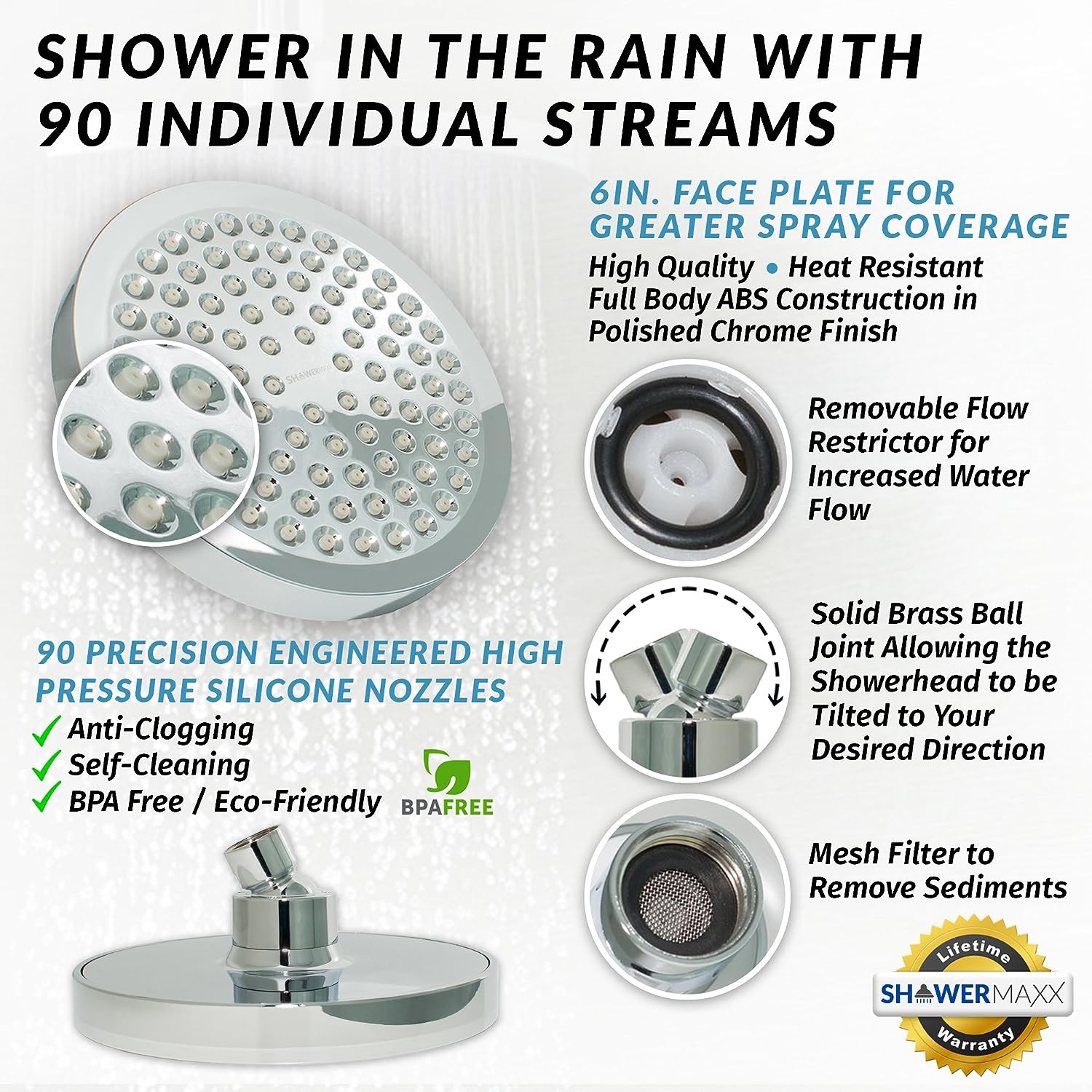 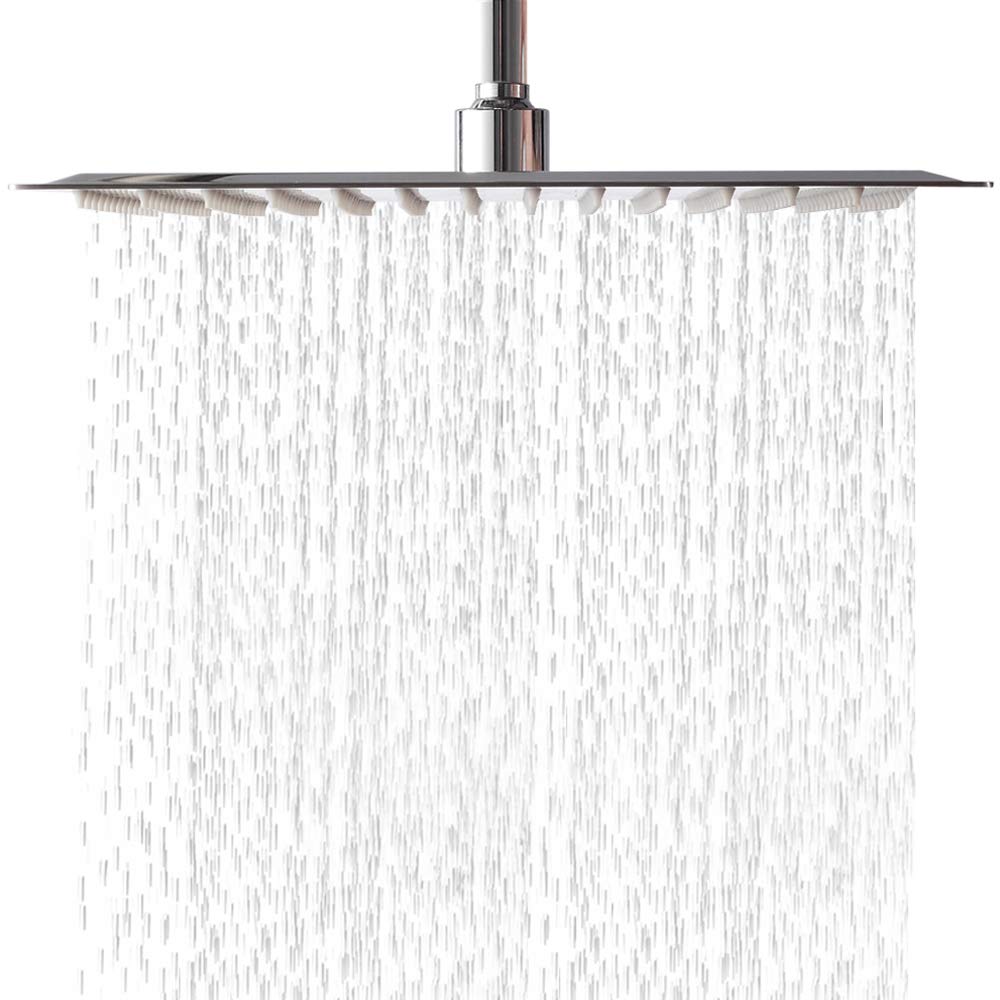 If you’re looking for an authentic spa experience without leaving home, get things started with the LORDEAR squared-off rain shower head.

If you’ve got a minimalist bathroom and you loathe bulky fixtures and fittings, you’ll love the sleek and low-profile aesthetic of this rain shower head.

Your love affair will continue as you’re showered with a luxurious spray from the substantial 12-inch adjustable head.

Build quality is immaculate and you’ll get an attention to detail you wouldn’t expect in a cheaper rain shower. The silicone nozzles ward off that irritating mineral build-up that so easily clogs showers and worsens your experience. You’ll be covered for repairs over the lifetime of the product.

For a design-driven rain shower head that’s not a case of form over function, the LORDEAR is worth a place on any shortlist. 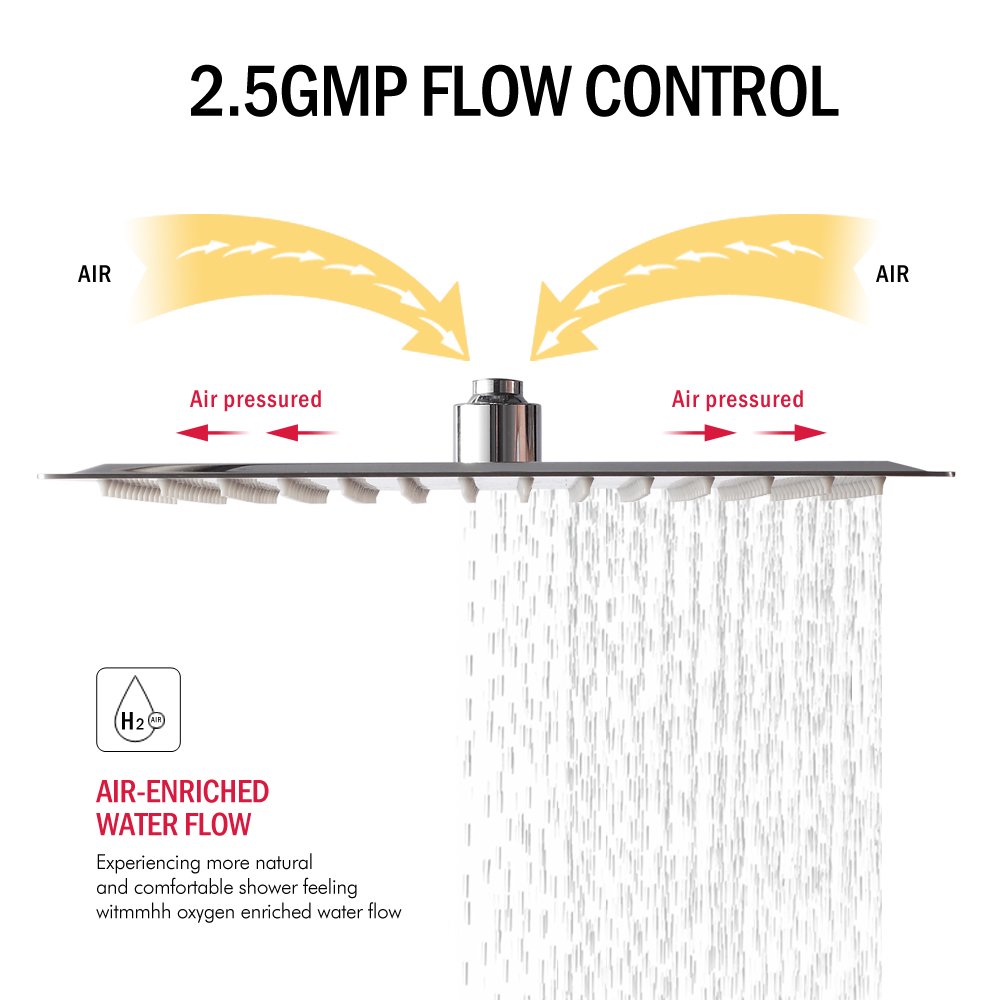 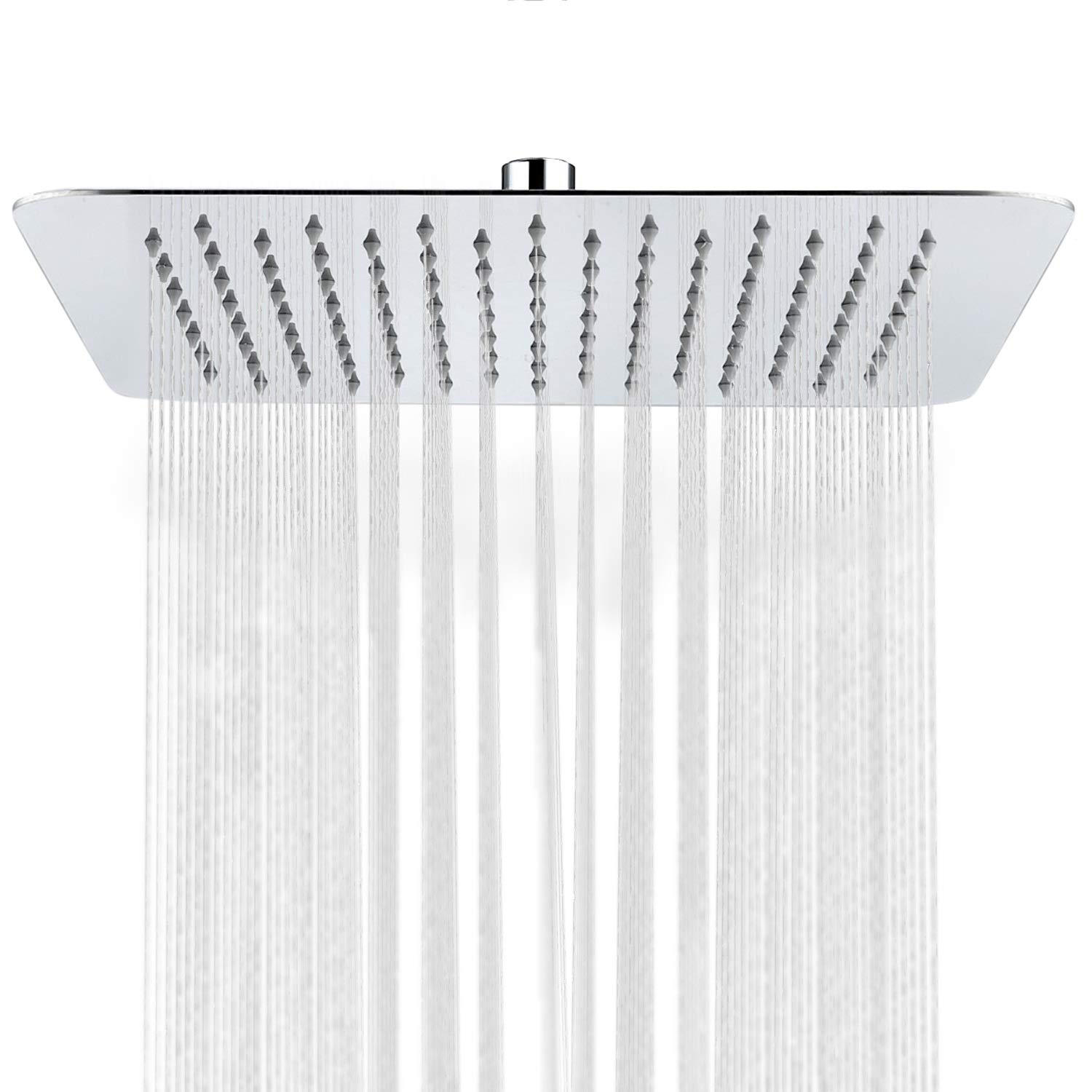 As we near the end of our rain shower head reviews, we’ve got another 12-inch beast, this time from Sun Rise

With any cheaper product, you’ll always expect some compromises and, while this shower head looks fantastic, a few users have griped about disappointing lifespan.

Once you’re in the shower, you can easily rake the angle of the square head to fine-tune the spray to your exact taste.

If the 12-inch squared model isn’t to your liking, you can opt for a smaller 10-inch spray in a rounded design. We prefer the raw utilitarianism of the square design along with the more generous spray delivered.

For a bargain basement rain shower head with any but entry-level performance, this Sun Rise classic will not disappoint. 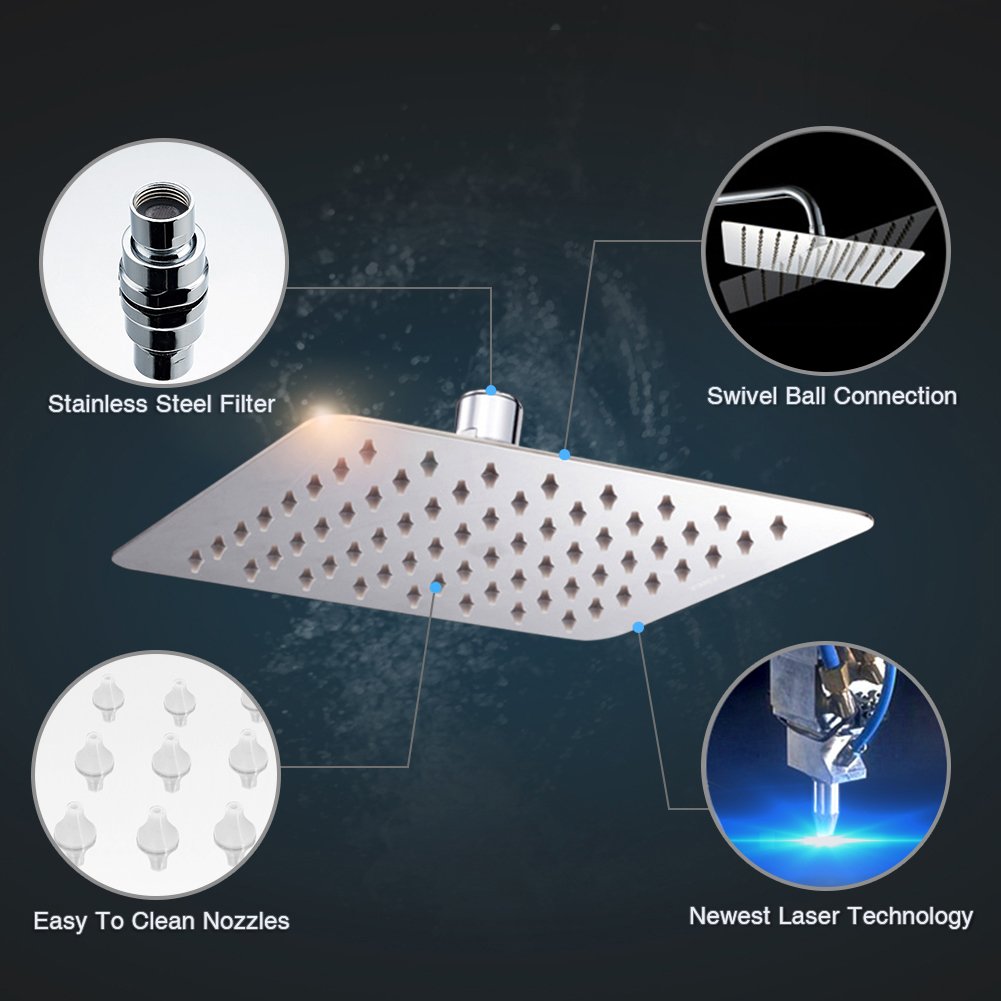 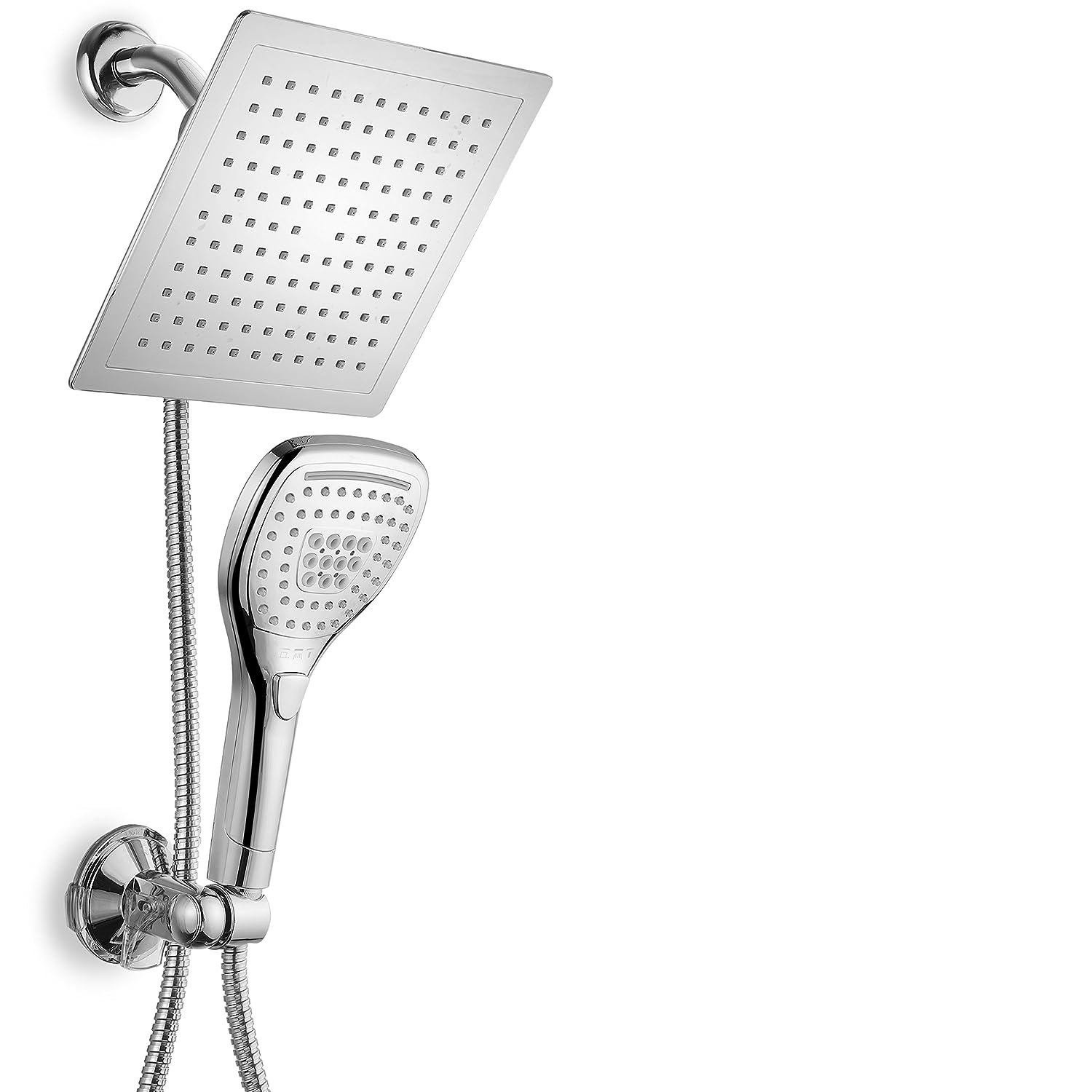 Last but not least in our rain shower head reviews is a smaller 9-inch combination unit offering full rainfall from the main head while also making full use of the handheld for a totally immersive showering experience.

If you’re looking for a pocket-friendly way to bring hotel luxury back home with you, the DreamSpa is a multipurpose unit that punches above its weight.

The 9-inch spray gives you reasonable coverage and you can enhance this by pressing the detachable handheld shower into commission. Flow control is easy to manipulate using the hand controls so you won’t be fumbling to adjust the spray when you’re trying to relax.

You won’t need any tools or more than a few minutes to get this head installed and running.

As with pretty much all the best rain shower heads, you’ll get a lifetime guarantee meaning if this doesn’t deliver the experience you imagined, you can get a no-questions asked return or exchange. You can’t ask for much more than that and we’re sure you won’t be sending anything back if you roll with this fine rain shower head from DreamSpa. 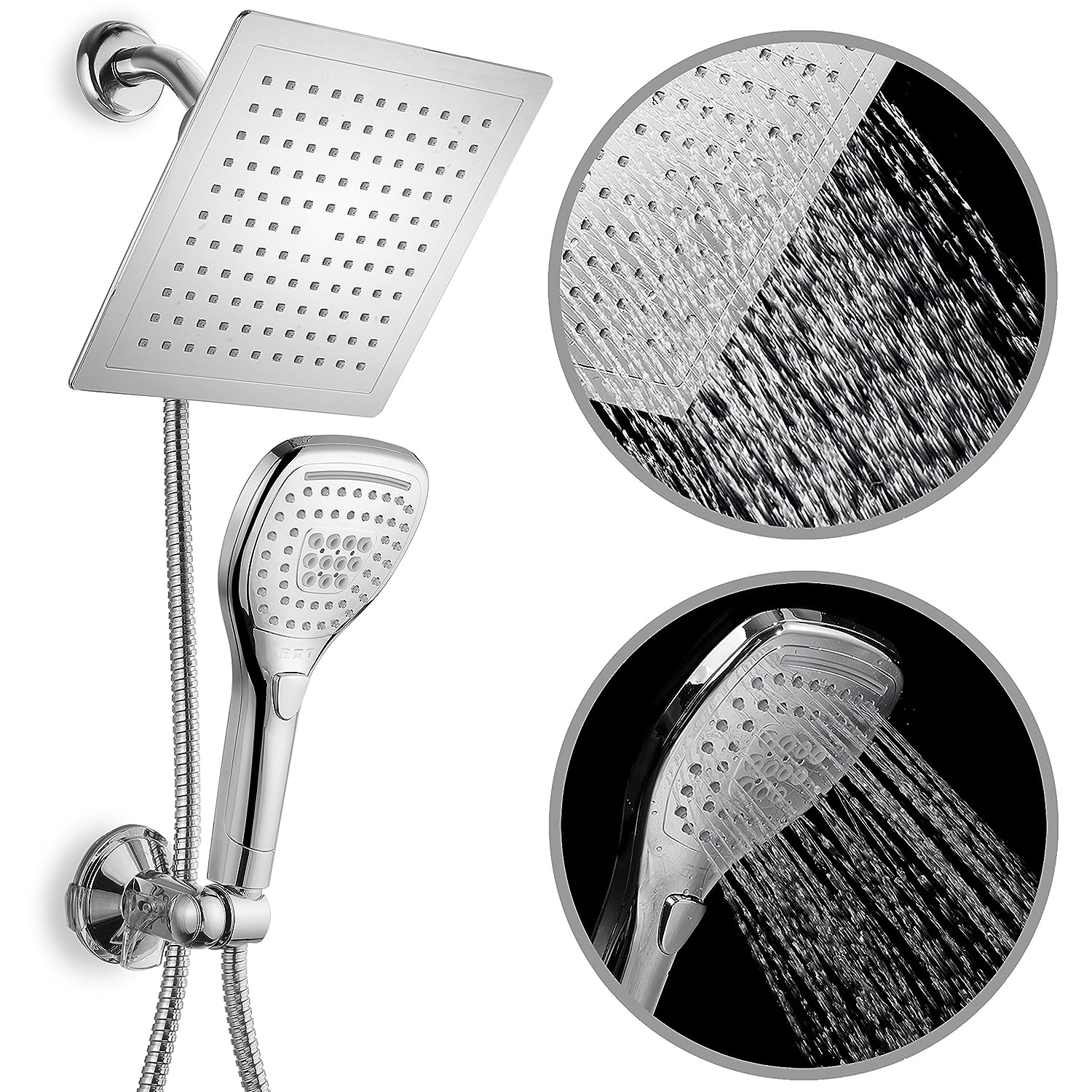 Now we’re done with our rain shower head reviews, it’s time to round out with a few factors to think about when you’re looking to uprate your shower.

What To Look For In The Best Rain Shower Head

Showers come in a bunch of different configurations and styles. When you’re in the early stages of planning a new shower, it’s worth pondering your basis options…

Questions To Ask When Considering a New Shower Head

You should frankly analyze your needs to maximise the chance of getting a shower head that will deliver precisely the experience you want rather than involving any degree of compromise.

Think about these questions before committing to purchase…

There’s no right or wrong answer to any of these questions but you’ll get a much firmer idea of what types and styles of shower head will work best.

While price always plays a role in any purchasing decision, it should never be the deciding factor.

Even the very best rain shower heads are not particularly expensive so set your budget and stick to it rigidly. This will immediately whittle down your options and allow you to slash your shortlist with no effort whatsoever.

With any luck, you’ve now got the best rain shower head for your needs firmly in your sights.

Drop us a line any time if you’ve got any queries or feedback at all. We’re here to help in any way we can and always love to hear from our readers.

The 5 Best Wall Mirrors In All Shapes And Sizes: 2021 Buying Guide

The 5 Best Wall Mirrors In All Shapes And Sizes: 2021 Buying Guide